In this game engine faceoff, we’ll explore each game engine’s visual scripting tools to see which engine is the best for beginner game makers and non-coders.

Which Game Engine Has The Best Visual Scripting Tools For No-Code Devlopment?

First, I want to be clear that all four of these game engines are incredible. All four offer non-programmers an opportunity to build video games without having to know how to code. We’ve talked with many students in our online game development course for beginners, and we’ve seen great examples of beginners using all four of these game engines to produce spectacular indie games.

However, each game engine takes a different approach to how its software handles the no-code game development process. So if you’re not sure which game engines or tools to use, my hope is that by the end of this tutorial, you’ll be able to make a more informed decision about the software that’s right for your game development goals.

First, I want to be clear that all four of these game engines are incredible. All four offer non-programmers an opportunity to build video games without having to know how to code. However, each game engine takes a different approach to how its software handles the no-code game development process. So if you’re not sure which game engines or tools to use, my hope is that by the end of this tutorial, you’ll be able to make a more informed decision about the software that’s right for your game development goals.

Most of you reading this will be coming from non-coding backgrounds. You’ll likely be designers or hobbyists looking for an entry point into video game development. You likely have little to no experience working with C#, C++ or any other coding language for that matter. For this reason, I’ve designed this list to focus exclusively on the no-code tools built into these game engines.

So let’s jump in and look at comparisons between each game engine now.

Unity is a powerful engine. It’s possible to get started with Unity for free if your revenue or funding was under $100,000 in the last year.

Unity has a reputation for being a complex game engine designed to help developers make AAA games. However, recently they have made some major pivots which allow non-programmers to more easily use their game development software. One of the biggest changes that took place, happened earlier this year when Unity acquired Bolt, a visual scripting tool, from the original developers (Lidiq), and then made Bolt FREE for anyone to use (see our tutorial on Bolt game development). Previously Unity’s two most popular visual scripting tools, Bolt and Playmaker, were both paid add-ons. However, with Unity’s acquisition of Bolt, they’ve made it possible for anyone to program games without having to learn how to code for free.

Unity took another major attempt to onboard more no-code users last year when they launched the 2D and 3D game kits (which are also free assets). Essentially, these game kits come with every imaginable asset you need to make games. The appeal of these game kits is that they come with pre-built scenes that allow users to interact with and learn from a pre-built game environment.

Doing things like importing characters, animating them and making them interact with their world can be a daunting process. Further, doing things like programming skyboxes, game cameras, and game physics can be way too complex for non-programmers. However, with the 2D and 3D game kits, all of these things are pre-built for you, so instead of having to build these components from scratch, you can just modify what’s in the game already and simply customize it to make it your own.

Lastly, Unity recently conducted an IPO (Initial Public Offering). While I can’t be 100% sure of this, I do believe that Unity will come under increased pressure from their board to get Unity in the hands of more users. I imagine at least a few closed door meetings where executives talk “market share expansion”. Therefore, I wouldn’t be surprised if Unity continued to try to get their software in the hands of more game makers by producing more no-code development tools for their game engine.

As mentioned earlier, the game engine itself is powerful. Unity is designed to give game makers full control over their games. It’s a professional grade game engine specifically designed to help facilitate the creation of high-end games. So when you first login to Unity and view the interface you might feel a bit overwhelmed by everything that’s possible. The same is true for Unity’s visual scripting tool called “Bolt”.

Bolt is a fairly easy visual scripting tool to use, but Unity’s goal is to give game makers the control necessary to make the games they want. Sometimes giving game makers more power and control, comes at the expense of simplicity. If Unity designed for simplicity, then the expense might come at the cost of power. However, Unity wants to give its users full control over their games, so with Unity, don’t expect an overly-simplistic game development process. In fact, Bolt gives users API access to Unity’s library of 23,000 units (programmable nodes). Essentially, these are the programming components you can use to build your games (without code). Now of course, you won’t use all 23,000 nodes to program your game, but they are there for you if you want them.

In summary, Unity is a great game engine to use if power is your focus and you don’t mind going through a bit of a steeper learning curve. However, I would also like to point out that Unity does an excellent job of helping reduce any friction between new users and their software by having a very well thought out new user onboarding process. After you register with Unity, you’ll go through a series of helpful tutorials which will help you better understand their game engine and then you’ll even have the chance to play with the development of “micro-games”, which essentially are hands-on learning tools to help you better understand their game engine. 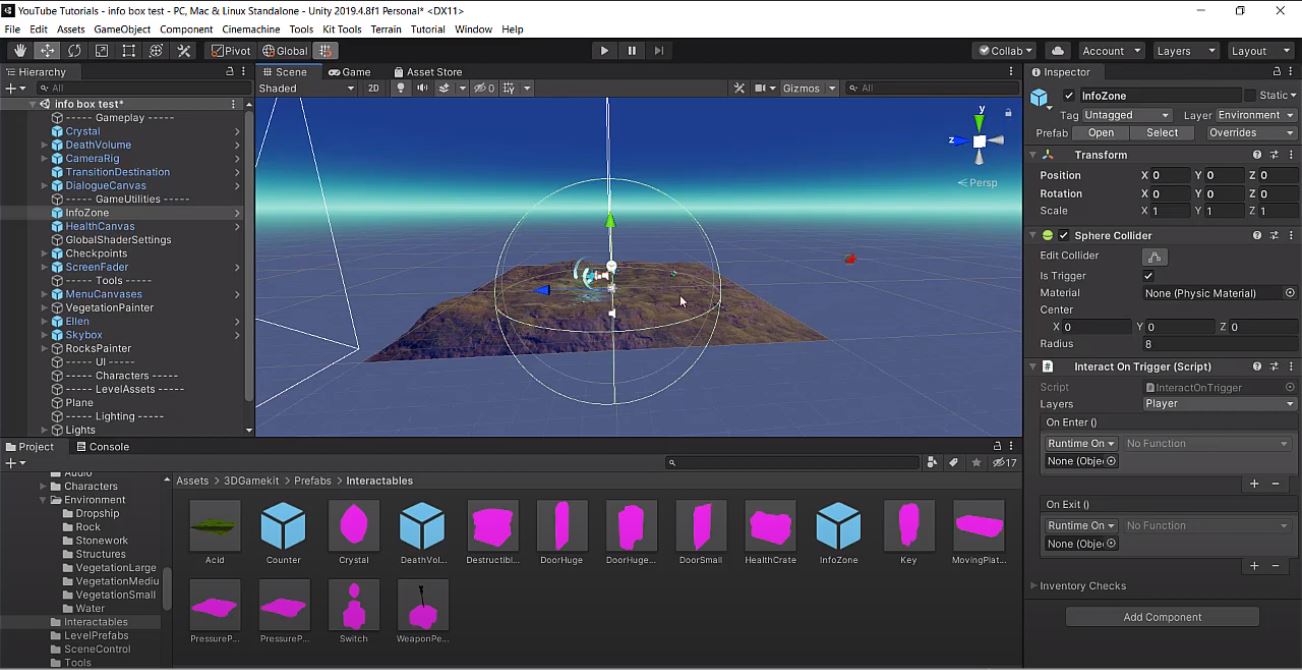 If you’re looking for a 100% free alternative to Unity, Godot is a great option. While Unity has a free personal option (for those making less than $100,000 / year), Godot is open source and 100% free regardless of how much money you make.

Like Unity, Godot is a powerful game engine (see our introduction to Godot tutorial here). You can make an equivalent looking game in Godot that you could make in Unity.

However, there are a few considerations you need to take into account. Godot is powered by an open source community (which is its strength), but that also means the community is dependent on the contributions of others to help support and develop the project.

We do our part by creating tutorials about Godot (like the one we linked to above) so others can learn how to get started with this game engine. That said, the Godot community is smaller than Unity’s. Therefore, you might find it more of a challenge to find the right tutorials, plugins, examples or documentation to help get you over hurdles you might face during the game development process. So I would argue that the learning curve with Godot will be a little bit steeper than it is with a game engine like Unity.

Buildbox is a great alternative to Unity and Godot if you’re looking for a really easy game engine to get started with.

Buildbox is still quite a complex engine under the hood, but when you first open up Buildbox, the game engine presents you with a very basic interface with a heavy focus on visual programming. Where Godot and Unity have prioritized power and control, Buildbox has prioritized ease of use and a less intimidating learning curve.

However, buildbox has a heavy focus on mobile game development and you’ll see that a lot of their tutorials and demos are really geared towards games you’d play on your android or iOS device.

Buildbox also uses a visual scripting tool to allow users to build their games without having to know how to code. Buildbox uses a “mind map” feature which allows game makers to use “nodes” to plan their game’s top level game logic (i.e. levels, user interfaces etc). Once the game is launched, users can select any object within any scene and then be brought to that object’s node control page. On this page, game makers are given access to more granular control over what each game object can do (i.e. animations, interactions, collisions etc).

And if you want even more control, each node has a little “edit” icon which allows you to dive deeper and edit the script of any node you want. But as you can see, Buildbox prioritizes the presentation of their no-code tools over their more complex scripting tools. This makes Buildbox a great option for those looking for a game engine that is easy and fast to learn.

The closest comparison to Unreal Engine on this list is Unity. Unity and Unreal Engine often battle it out in online forums for “best game engine”. However, the answer to that question is not so simple, especially as it relates to no-code game development.

First, let’s look at pricing. Unreal Engine offers a free tier as well. However, this free tier doesn’t apply to those working in games. Therefore, if you want to publish and sell games, you’ll need to buy their publisher license.

If you decide to order Unreal Engine and you don’t know how to code, you’ll need to use their visual scripting tool called “Blueprint”. Blueprint is very similar to Unity’s Bolt in that nodes with built-in functionality need to be connected in order to “program” your game.

For me personally, I feel that Unity’s Bolt and Unreal Engines Blueprint are pretty evenly matched when it comes to being beginner friendly. Both are very powerful tools (and they prioritize that power), but at the same time I feel that both Unity and Unreal Engine have done an excellent job of catering their no-code development tools to their target audience, generally designers, who don’t know how to code. Therefore, when you’re using Blueprint, you’ll feel the power, without feeling intimidated by the tool. It’s easy enough for beginners to get their heads around.

I personally however, don’t find C++ much harder than C# and in fact, there are so many similarities between them, that learning one, will make learning the other a lot easier. So I’m not sure the coding language issue should really be that much of a consideration at all.

So that’s all I have for you today. I hope you found this game engine software comparison helpful and I hope this article will help you make the best decision for you based on your no-code game design needs. Every game engine mentioned in this list is incredibly powerful. They are all capable of making extraordinary games. At the end of the day it boils down to your personal game development preferences and goals.